I had the honor of being invited to participate in the Banff Forum this year to share some thoughts around citizen engagement and how technology is impacting democracy. Banff is one of my favorite places, it is just so stunningly beautiful.

I hosted a fireside chat (there was an actual fire, it was hot, lol) and discussed some of the implications of living an increasingly online life. I had a really great time during this session because it was informal and intimate with about 20-35 people coming in an out as the discussion progressed. We spoke about the future of privacy and what it would mean to live in a world where most of your actions are being analyzed, tracked and recorded.

Personally, I believe that in order to understand how some of these technological changes are going to affect us we really need to understand how our perceptions of our online identity are evolving and changing. You can read some of my initial thoughts on the evolution of web personas here. Whenever a new social network or service comes out I always find myself returning to the anchor of online identity to evaluate how it’s going to impact our lives.

I also participated on a panel the next afternoon about citizen engagement. Here’s the session description from the programme:
The inaugural Banff Forum had a strong focus on citizen engagement. While several Forum participants went on to more prominent roles in the public arena, for the past decade, most indicators of civic engagement in Canada have been moving sideways at best. Increasingly, politicians and civic groups have looked to social media as a means for mobilizing the electorate around  issues and political action. This trend has produced a variety of results and raised a number of important questions. Within a pluralist democracy such as Canada, what are a citizen’s responsibilities and obligations? How can these best be fulfilled? What is the role of emerging technology in our public life? Is voter participation the ultimate test, or simply one of many ways, to measure civic engagement?

Tony had such an inspirational story about how he rallied his local community to oust some city councillors who were not respecting his town’s historical heritage. It always comes back to local change. Local change needs to take place as a pre-cursor to any global shift in thinking.

Mark, was brilliant as usual. I’m such a fan of his work and it was so great to meet him in person. It’s always refreshing to meet someone who is so down to earth and laid-back despite being tremendously accomplished. Scott, our moderator was just amazing, we hit it off instantly and he kept me laughing for the entire duration of the Forum.

I had the chance to meet Calgary’s Mayor Nenshi, North America’s first Muslim Mayor! I thought it was pretty ironic that conservative Calgary elects a minority mayor, and liberal Toronto elects…Rob Ford.  Mayor Nenshi spoke at length about how important it was to build open dialogues with members of the community and how he believed that most people want to participate in making their city a better place. It was so great to hear his various initiatives to bring increased transparency and accountability to municipal government. I hope we get more political leaders like him! All in all it was a fantastic trip and the icing on the cake was visiting the local Banff Hot Springs which were just amazing (pictured below). There is nothing like sitting in a giant outdoor pool full of steaming water, surrounded by snow topped mountains and forests. I think next year we should have all of the sessions inside the springs. 😉 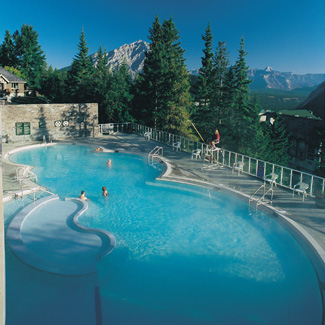 ps: We also visited the Oil Sands up at Fort McMurray, but that’s an entirely separate post that I will put up once I get some of Jesse’s awesome pictures!